Finally, Samsung launched its most awaited high range Smartphone ‘Galaxy S5’ today. The phone was on the top in list of upcoming phones for a year and now available with its powerful and exceptional features. We got a look today at the launch event. Samsung Galaxy S5 is available for sale now in south Korea, two weeks early-which is a big surprise.

The device will be available for sale in other 150 countries from 11 April but launched two weeks early in South Korea.

Korean company wants to get hold the S5 phone in the hands of Smartphone fans soon because the company has no authority to sign up new customers in parts of April and May, punished by the government in the case of illegal subsidizing new consumers. 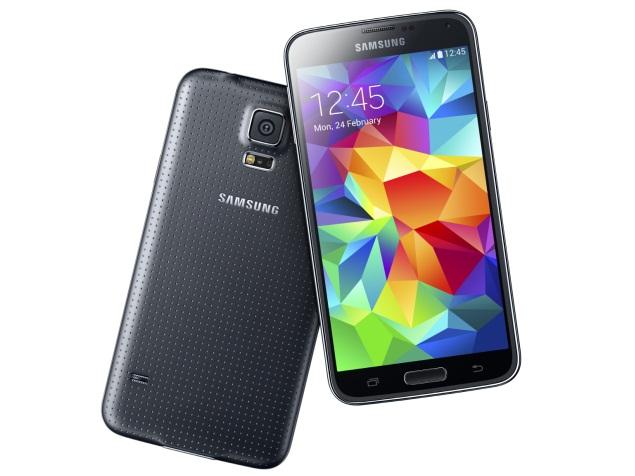 When we checked the device for short time, we found that Samsung has removed glossy plastic cover finally from this handset. Samsung had been using glossy plastic cover for a long time with all handsets which was the most loathed thing by the users. Now the Korean brand used plastic matte finish back cover, which provides soft grip. The cover is made with dotted pattern but the dots are small.

We felt changes in design and material of back cover is for good. Galaxy S5 gives better feel than its flagship predecessor Galaxy S4. However, the design and style does not match iPhone 5S or Sony Xperia Z1.

The device comes with large display however it makes feel light in weight. The phone has round edges and sleek body that fits in the hands properly.

The device gives premium look even there is not much metal in the body. The company is using metal frame for the phone which fits perfectly around the phone.

The all thee buttons- two touch-sensitive buttons for back and menu options and one physical button for home-exist below the screen. The company has not made any on screen buttons in S5.

Samsung Galaxy S5 is completely waterproof and dust resistant phone. Fingerprint screen feature also exists on the device and USB port is covered with flap. The fingerprint scanner feature is similar like other high range phones; the user has to swipe to unlock the phone if the fingers match, the phone unlocks. The user has option also to put the password manually.

The camera is equipped with heart sensor technology and works well. The feature can be accessed with S Health app on the device that measures heart rate when a user touch finger on top scanner.

The camera was found very quick and responsive and capable to shoot pictures very fast. We will discuss on camera in next review.

The device will run on Android 4.4 KitKat OS. It features a 5.1 inch Super AMOLED display with 1080×1920 pixels full HD resolution display. The device is powered by Quad-core 2.5 GHz Krait 400 processor with 2GB of RAM. The handset will be available in two storage module -16 GB and 32GB, which is expandable upto 32 GB.

All connectivity options are exist on the phone such as 4G LTE, Wi-Fi 802.11, ANT+, Bluetooth 4.0, USB 3.0, NFC and Infrared remote functionality. It comes with 2800mAh powerful battery, which is to be claimed offering talk time upto 21 hours and standby time up to 390 hours.
Overall, we found the phone very impressive. The design and hardware is better compared to other available phone. The users will gain new experience while watching FHD videos and playing 3D games. The users will have to some wait to hold this phone in their hands.